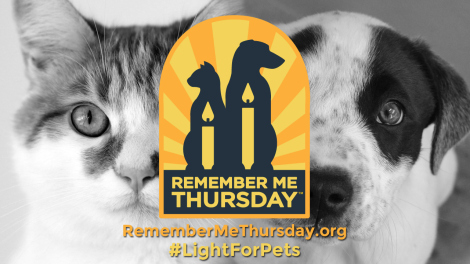 Mike Arms says that while more dogs and cats are adopted every year, his heart breaks for those that aren’t. “I wanted to shine a light on those who don’t make it out,” says the president and CEO of the Helen Woodward Animal Center in Rancho Santa Fe, CA. That’s why he began a campaign called Remember Me Thursday back in 2013. Shelters and even individual pet owners light candles to remember on September 24.

Numbers have become very important in the shelter world, as individual shelters and even municipalities keep careful track of the number of animals that go into shelters, adoption rates, and the numbers that are euthanized. “I understand this, but these beautiful orphans aren’t just numbers, they’re all individuals,” Arms says.

From the humble start of a few dozen shelters and rescues jumping on board to what seemed like a good idea, this year about 360 shelters and rescues across America are participating, with another 22 in Puerto Rico, and about a dozen more including Canada and Mexico. In all word-wide 476 groups representing 139 nations, including both Russia and the Ukraine, at war with one another.

Of course, governments aren’t participating but individual shelters and rescues in countries who all want the same thing, says Arms. “We’re here for all the right reasons, and it’s the same in Russia and the same in the Ukraine,”

There are organizations as wide-ranging as the Swaziland (Africa) Animal Welfare Society to Kansai Japan Animal Refuse to Animal Advocacy in Bantry, Ireland. “In my 45-years in animal welfare, I’ve never seen anything like this,” Arms says.

So how does a campaign like this take off? In part, Arms credits social media. In an email interview from several months ago, actress Katherine Heigl said, Remember Me Thursday is a remarkable day where we take time to both recognize those animals who died in shelters alone without a home, and those who are still waiting for homes.”

She continued, “Every day, 10,000 dogs and cats are killed in America. Euthanasia is the number one killer of dogs and cats. We have the means to end this by making the choice to adopt rather than to purchase an animal from a pet store.”

Heigl and her mother Nancy founded the Jason Debus Heigl Foundation in 2008 in memory of her brother who was killed as a teenager in a car accident. “He was a compassionate and very kind person who loved dogs and cats, and all living things,” said Heigl. “His short life inspired us to try to do more to help end the plight of homeless animals in his memory.”

In many places pet adoption events and other activities will also happen on Remember Me Thursday. In Puerto Rico, a good part of the focus will be on teaching animal welfare to young kids in school, with a focus on saving “satos” or strays. Hundreds of kids in fourth through six grades will wear yellow and teachers will be dressed in red will create a kind of human candle.

Arms – who also began an international adoption campaign called Home 4 the Holidays in 1999, which has been responsible for the adoption of about eight million pets, he says. This year’s Home 4 the Holidays from Blue Buffalo which kicks off only days after Remember Me Thursday. The idea is to support pet adoptions around the Holidays. “We’re doing better but millions of these beautiful orphans – who have done nothing wrong – desperately need a home,” Arms concludes. “There’s nothing like it , like having a non-judgmental best friend – and even better if you save a life.”