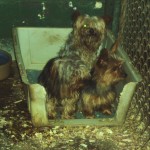 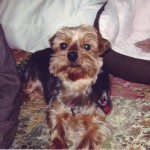 In March 2010, The Humane Society of the United States, NJSPCA, Cumberland County SPCA, and Gloucester County Animal Control/Shelter joined forces to rescue 90 dogs from an unlicensed puppy mill in Monroeville, NJ. Since the rescue, many of these at-risk animals have been placed in foster homes or have been adopted, while others are continuing to receive medical treatment and are still working toward learning to trust humans.

"These dogs are finally receiving the medical treatment they desperately need after years of neglect," said Heather Cammisa, New Jersey state director for The HSUS. The Animal Alliance of New Jersey, which took in 11 of the dogs, has reported that many of them have serious medical issues. Executive Director Annie Trinkle reports that one dog, Aspen, a 2-4 year old female Yorkshire Terrier, “shows evidence of being bred repeatedly. She has a grade 4 heart murmur, which is so severe that it is palpable through her skin. She required immediate treatment with Enalapril, a cardiac medication, and will soon receive a cardiac ultrasound to determine the degree of heart damage. Aspen also has ringworm, a fungal skin infection, and is still under daily treatment for giardia and coccidia, two intestinal parasites. She was infested with fleas, and has flea allergy dermatitis on her hind end. Her teeth are in miserable condition and once her heart is stabilized, she will need a veterinarian to perform a dental cleaning with extractions.”

Cumberland County SPCA who took in fifty of the dogs, reports, “Except for newborn pups under two weeks of age, all dogs required treatment for parasitic infestations. Other symptoms included pale gums, soft stools, diarrhea and lethargy.”

Lizzy, a 1 1/2 year old Yorkshire Terrier who was rescued from this puppy mill was placed into an adoptive home by Noah’s Ark Animal Welfare Association. She spent her life in a cramped, dirty cage for the sole purpose of breeding puppies for profit. She received very little, if any, socialization by humans and little if any veterinary care. Lizzy had painful hemotomas in her ear flaps and she tested low grade for heartworm. Although she began her life in misery and fear, she is now living in freedom in a happy home.

Just weeks after her rescue, a senior couple, Mr. and Mrs. S of Newton New Jersey, visited the shelter to look for a small dog and  fell in love with Lizzy. They say she was timid at first but warmed up to both of them quickly. Although she can’t jump up on the bed, Lizzy sleeps in the bed close to Mrs. S. “It took some getting used to Lizzy walking on a leash, but she is getting better and she leads full speed ahead back home, where she knows she’s safe,” they said. Mr. and Mrs. S say that she loves car rides – it adds “spice to her life.”

Puppy mills such as the one where Lizzy was confined highlight an enormous loophole in the federal Animal Welfare Act, which allows large-scale breeding facilities to operate without federal regulation if they sell directly to the public or over the Internet, which is how the New Jersey facility was marketing its puppies. Legislation introduced last month (May 2010) seeks to close the loophole which allows large scale Internet and direct-sales breeders to keep dozens or even hundreds of dogs confined to puppy mills without federal oversight.

For more information on the introduction of the PUPS Act, please go to: http://www.humanesociety.org/news/press_releases/2010/05/federal_puppy_mill_bill_052510.html.

Kim Alboum is North Carolina's state director for The Humane Society of the United States. Since 2005, she has served as a volunteer coordinator and later as a board member for the Puppy Mill Awareness Day Organization. Her volunteer responsibilities also include tracking dog breeding legislation and cruelty laws.

More about Kim More Articles from Kim
JOIN THE CONVERSATION

One thought on “Rescued Dogs Adjust to New Homes”