In the late 1970s, I was living in Brooklyn, New York. Most weekends I could be found at a rock club called L’Amours, which featured local bands. Between sets, customers would mingle and have a few drinks. Each time a band was about to play, the management would broadcast a song that began, “Welcome back my friends to the show that never ends, we’re so glad you could attend, come inside, come inside.” As soon as the song began, people would start moving toward the stage, angling for a prime viewing spot. There weren’t any signs posted that said, “When you hear that song by Emerson, Lake and Palmer, run to the stage!” We had simply become conditioned through the repetitive pairing of the song with the beginning of the next set.

How does this relate to dog training? For your dog, your life together is the “show that never ends,” with subtle environmental signals being broadcast all day long. A leash being brought out means a walk is imminent; the doorbell ringing signals that visitors are present. While environmental signals happen all the time, they can also be used deliberately to your advantage. 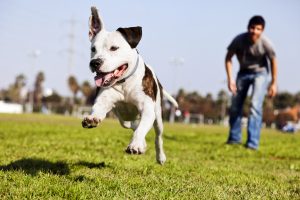 Environmental cues mean that the instructions to do something come from the environment, rather than directly from you. Here’s an example of how to put them to use: When visitors ring the doorbell, dogs typically bark and run to the door. Most owners, however, prefer that their dogs move away from the door, thank you very much! A “Go to your place” cue, meaning your dog should go to a mat or bed placed away from the door and down-stay until further notice, should first be taught. Once your dog has learned that, begin pairing it with the environmental cue—in this case, the doorbell. Ring the doorbell, then immediately follow it with the verbal cue and/or hand signal you’ve taught for “Go to your place.” Bell, cue, place. Bell, cue, place. With practice, your dog will begin to anticipate that the sound of the doorbell means you’re going to tell him to go to his place, and he won’t wait for your cue—he’ll just go to his bed whenever the doorbell rings.

Environmental cues can be used to solve a variety of behavior problems. If you have a dog who grabs things off the kitchen counter, even when you’re standing right there, you could teach her that your placing something on the counter is her cue to go lie down. Again, the order of events would be placing an item on the counter, followed by your cue to go lie down. Very soon your dog would lie down each time you placed something on the kitchen counter.

Think about the behaviors you’d like your dog to stop doing, and what you’d like him to do instead. Perhaps you’d like him to lie down when your family is eating a meal; in that case, placing the plates on the table could be his cue to go lie on his bed. The possibilities are unlimited. How will you make use of environmental cues?

Aly and Victoria discuss how you can make your dog feel more comfortable during the holidays. Whether your dog is shy of people or...

In this podcast, Victoria and Aly share great ideas on how to provide enrichment for your dog when it’s cold outside. Aly shares...