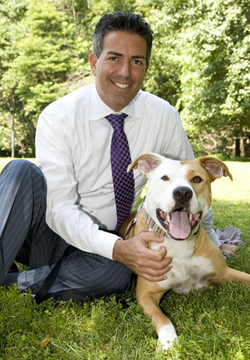 Wayne Pacelle is the president and chief executive officer of The Humane Society of the United States. Pacelle took office June 1, 2004 after serving for nearly 10 years as the organization's chief lobbyist and spokesperson.

During his tenure as HSUS president and CEO, Pacelle has spurred major growth for the organization, which is now the nation's largest animal protection organization with 11 million members and constituents, annual revenue of $130 million, and assets of $200 million. The growth has partly been achieved through successful mergers with other animal protection organizations. In 2004, Pacelle and Michael Markarian (president of The Fund for Animals and now Chief Operating Officer at HSUS) helped engineer the corporate combination of The HSUS and The Fund for Animals, the national organization founded by Cleveland Amory. In 2006, he was the architect of a combination with the Doris Day Animal League, founded nearly 20 years ago by iconic actress Doris Day, and also one of the major American animal protection organizations. More recently, he created the Humane Society Veterinary Medical Association, after the formerly named Association of Veterinarians for Animal Rights was brought into the HSUS family.

Pacelle's work on animal issues has been featured in thousands of newspapers and magazines across the country. He has been profiled in The New York Times, The Wall Street Journal, The Washington Post and Los Angeles Times, and has appeared on almost all of the major network television programs – including 60 Minutes, The Today Show, The News Hour with Jim Lehrer, Larry King Live, Good Morning America and ABC's Primetime Live.

In addition, Pacelle is an experienced writer with numerous pieces published in a variety of newspapers, journals, and magazines including Human Dimensions of Wildlife, Campaigns & Elections, and George Wright Society. He has written columns for dozens of major daily newspapers, including The Washington Post, Los Angeles Times, The New York Times, Chicago Tribune, Baltimore Sun, Dallas Morning News, Detroit Free Press, St. Petersburg Times, Seattle Times and San Francisco Chronicle. He has written chapters in a number of books dealing with animal issues and the initiative process. He blogs daily at Wayne Pacelle: A Humane Nation.

Pacelle received his B.A. in History and Studies in the Environment from Yale University in 1987.