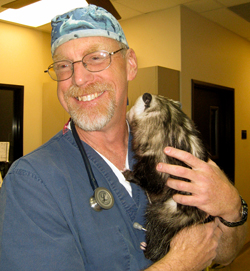 Dr. Amsel was born into and raised in a medical family on Long Island, New York. He has lived in California since 1978 and in the Los Angeles area since 1986. During his undergraduate college years, Scott pursued an interest in both biology and radio production while spending all his spare time scuba diving. Prior to attending veterinary school he developed and nurtured his interest in exotic animals while working as an announcer, guide and show producer at the Miami Seaquarium, the San Diego Wild Animal Park and Marine World, Africa USA. Subsequently, while attending veterinary school at the University of California at Davis, Scott specialized in the study of zoo and wildlife medicine.

Since receiving his veterinary degree in 1984, Scott has studied epidemiology and preventive medicine and experienced a wide variety of fascinating veterinary adventures. These include: over five months working in the Amazon with wild river dolphins as veterinary supervisor to the movie production of "Where The River Runs Black", care of wild dolphins in Taiwan, rescue and rehabilitation of Orangutans in Taiwan and Indonesia, development of a wildlife rescue program in Thailand, and a two-year stint as staff veterinarian at the Los Angeles zoo. He has presented papers before the American Association of Zoo Veterinarians as well as publishing original work in various veterinary journals. After working at Disney’s Animal Kingdom in Orlando for a year Dr. Amsel moved back to Los Angeles in 2000 to run his own practice caring for many of the exotic animals working in the entertainment industry.  He serves as the veterinary consultant for Los Angeles-based episodes of It’s Me or the Dog.

Since then he has starred in a national Science Diet television commercial, spent hundreds of hours doing no-cost spay/neuter for low-income families, worked on two reality television programs and continued attending to regular pets in private practice. His overwhelming desire to improve the lives of animals and educate people of the importance of caring for all animal species are part of what makes him a unique individual in the field of veterinary medicine.