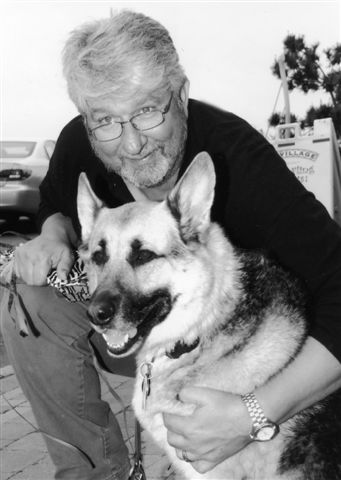 Sam Wike was born and raised in NJ, continually surrounding by dogs while growing up. His father's preference was always German Shepherd Dogs and they were of varied personalities. The earliest GSD in Sam's life was his father's favorite, Lissa. She was truly a one person dog, belonging heart and soul to his father. She and Sam had a very uneasy relationship, maily because Sam was never one to let well enough alone. Being admonished time after time to let Lissa alone while she eats, sleeps or is with your father was never good enough for Sam and so he was bitten frequently, never with malice but he never quite got the message. Years later, Sam would begin to understand what she had been trying to tell him.

It was during Sam's service in the Army, as a military police officer stationed in Germany, that he had the chance to become more educated about dogs. Sam found himself billeted with the military police K9 handlers; some had sentry dogs, others guard dogs. Though the dogs served different roles in the unti, the handlers were of one mind- this is my partner. Military handlers are trained at Lackland AFB and the training back then was very old school. Lots of leash corrections, 'hanging' of a stubborn dog, physically aversive training. However, the handlers in Sam's unit, now on their own with their K9s, treated their dogs like royalty, understanding that their four legged partners were to be treated with respect and understanding if they were to have a relationship built to trust each other. When Sam rotated to his next duty station at Ft Monmouth, NJ, he again found himself working with a very dedicated DOD police k9 handler who would later find him a four legged companion.

Sam left the Army is 1989, becoming a police officer with NJ's mass transit agency. It was early during this time that Sam's DOD K9 handler friend found a Siberian Husky stray that Sam took in, naming her Ivy. She became a huge part of his life, teaching him a lot about how a dog sees life, what a houdini Husky's can be and how much she needed his care. They had a tremendously fulfilling life for many years but once he began working multiple double shifts each week, month after month, Sam made the decision to rehome her so that she could continue to have the best life possible. It was one of the toughest decisions he ever had to make.

In the aftermath of the terror attacks on 9/11, Sam's agency decided that he needed to deploy explosive detection K9s. Sam was chosen to be one of the three founding members of the unit and so began his journey to the present day. His instructors in K9 school taught a strictly positive reinforcement curriculum though there was no name for it at that time. He was taught that you and your dog were a team, your most trusted companion and that trust had to be earned and it could only be earned by working together, treating each other with respect and dignity, that play was the great motivator and the reward was a partnership. K9 Sanders became Sam's partner, his best friend, his loyal compatriot and in his words, "my boy". Sam eventually became the NCOIC of an 8 team unit, designed and executed the NJ deployment plan of 64 K9 teams and 8 EOD units for the 2004 Republican National Convention and found himself becoming increasingly intrigued by canine behavior.

They served for 5 years before they retired together. After taking a month off to enjoy retirement, Sam and Sanders began training comapnion dogs through the Petsmart program. It was there that Sam developed an intense interest in canine behavior, began reading all he could and was fortunate enough to land a job with a very highly regarded boarding, daycare and training facility in his area.  The owner of that facility is a long time trainer and now beame Sam's newest mentor, encouraging his interest in and helping dogs with behavioral challenges. While at this facility, Sam achieved his CPDT-KA, became heavily involved with the Best Friends Animal Society (becoming their first Community Training Partner), became a team leader of a core group of trainers that created and established programs at a local shelter and then audtitioned for and was selected to become a VSPDT.

Sam left the boarding facility in 2010 to start his own business, The Inner Dog, where he works primarily with dogs that are behaviorally challenged, helping them overcome their fears and other issues while teaching their owners how to help their dogs have the best life possible and stay in their forever homes. Sam also provides behavior consults for two local shelters and numerous rescue groups, provides seminars to the shelter and rescue staffs and volunteers on topics ranging from Canine Communication and Behavior, Establishing Playgroups for Shelter Dogs, Pre and Post Adoption Support, Owner Surrender Prevention and others, has been asked to become a member of the fledgling company MyPetzLife, has been asked to conduct webinars for Petfinder, is the first resource for the Best Friends Animal Society NYC Programs group, provides volunteer training prior to each annual Best Friends Super Adoption event and is a Best Friends Animal Society Recommended Trainer. Sam has attended seminars presented by Nicole Wilde, Dr. Nick Dodman, Ian Dunbar and the UPENN Behavior Dept., is a member of the Behavior Education Network, is a proud member of the force-free trainers group Pet Professional Guild and is a Professional Member of the APDT.