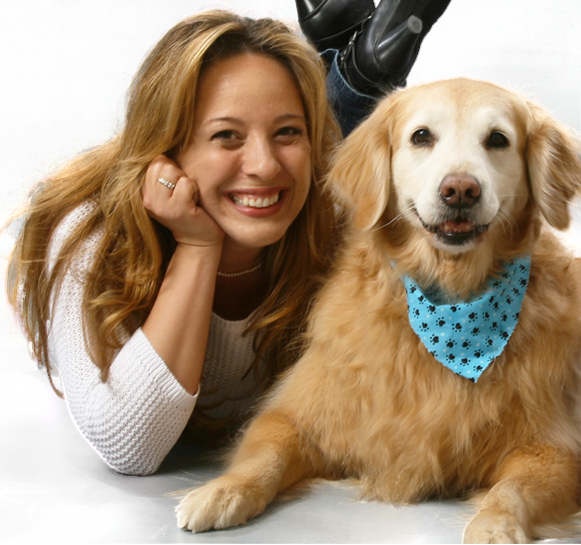 Lorena is a successful canine behavior specialist who was hand-picked by Victoria Stilwell, host of Animal Planet's It's Me or the Dog, to join Victoria Stilwell Positively Dog Training (VSPDT) and a Karen Pryor Academy Certified Training Partner (KPA CTP). She is accredited by the Certification Council for Professional Dog Trainers as a CPDT-KA, a professional member of the Pet Professional Guild, an AKC Canine Good Citizen Approved Evaluator, and is both a Family Paws Parent Education Licensed Presenter and a licensed facilitator with Doggone Safe's "Be a Tree" Program, thus promoting safety to families with dogs and teaching dog safety and bite prevention to schoolchildren.

A lifelong dog and animal lover, Lorena first started to develop her innate ability to relate to dogs at the young age of four, while staying with her aunt in western Venezuela. Her aunt's family's guard dog, Blacky, was kept outside chained to a tree during the day and cut loose on the property when the family went to sleep. Lorena was warned to keep a safe distance from Blacky, and she did. But somehow, Lorena understood that, more than anything, what Blacky needed was companionship. With adult supervision, she would toss scraps from the kitchen to the lonely dog, and she would quietly sit on the floor, beyond the reach of his leash for hours a day. She and Blacky became good friends, and to this day she refers to the big German Shepherd as her “first love”.

Now all grown up, Lorena has a Master’s degree in Aeronautical Science from Embry-Riddle Aeronautical University and a Bachelor of Science in Electrical Engineering from the University of Miami. Having spent over 10 years in these technical and scientific fields, she understands the importance of concrete, scientific studies and facts to confirm and understand how and why things work.

When Lorena and her husband Tom added Indiana, a bouncing male golden retriever puppy, to the mix, the dormant spark of understanding a dog's behavior and her passion for dogs were reignited for Lorena. After training with a rewards-based program, Lorena sought to educate herself as much as possible on canine behavior. This yearning for knowledge was doubled with the addition of Chayse, a female golden retriever puppy, to the family.

Lorena's quest to increase her knowledge on canine behavior and training that did not employ force, pain, or intimidation led her to network with other like-minded trainers and behaviorists nationwide. A mentor encouraged her to apply to Victoria Stilwell's Positively Dog Trainer team, and after a six-month-long application process, and after working personally with Victoria, Lorena joined the team in April of 2012 as a Victoria Stilwell Positively Dog Trainer (VSPDT). Having met that goal, Lorena decided to reach for another long-wished-for goal; she enrolled in Karen Pryor Academy for Animal Training & Behavior and embarked on a journey that would and sharpen her skills and increase her knowledge to the next level. She studied under Steve Benjamin, whom she refers to as Jedi Master Benjamin, and in March of 2013 joined her two classmates in becoming a Karen Pryor Academy Certified Training Partner (KPA CTP).

Lorena updates her knowledge on canine behavior and training techniques continuously—both exciting fields that are ever-changing. She is passionate about coaching dogs and their people via the use of gentle, force-free methods, joining the Truly Dog Friendly coalition, and becoming a full professional member with the Pet Professional Guild. She has been featured in the Orlando Sentinel, and has contributed to the book Top Tips from Top Trainers (TFH Publications, 2010).

The most prevalent reason that dogs are surrendered is behavior—unwanted behavior that owners don't know what to do about. Lorena’s goal is to spread the knowledge of how to communicate with dogs properly (and how to let dog realize that they are being understood) to dog owners. The human-canine relationship is one that has evolved over millennia. Most people only scratch the surface of the potential of that relationship. With the right knowledge and guidance, that relationship can bring so very much more to both species.

Lorena knows that anyone has the capability to train a dog, and to really learn to communicate with that dog. She understands that positive learning not only results in an obedient dog, but in a dog that truly has behavioral wellness—a dog that is balanced behaviorally and emotionally.

She lives in Orlando, FL with her husband, their human child, and a goofball Golden Retriever named Kenobi.