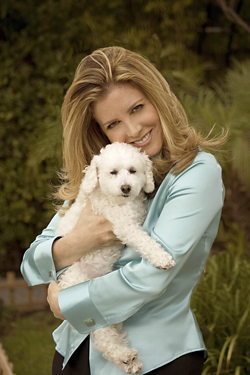 Jana Kohl, Psy.D., is a psychologist, animal welfare advocate and author of A Rare Breed of Love: The true story of Baby and the mission she inspired to help dogs everywhere (www.RareBreedofLove.com). Having worked for the Simon Wiesenthal Center for Holocaust Studies for many years, and now as an animal welfare advocate, she has long been concerned with how cruelty becomes sanctioned by society. Kohl has testified before the Illinois Legislature on the link between legalized violence against animals and inter-human violence, and has participated in numerous animal welfare campaigns, including the one to end the sale of foie gras in her childhood hometown, Chicago, Illinois. Kohl currently resides in California with Baby, a puppy mill survivor and a cat named Kitty Pie, whom she also adopted. She speaks to groups across the county about compassion toward animals.

Baby, the inspiration for the book A Rare Breed of Love spent the first 8 years of her life locked in a cage at a puppy mill, and was rescued by a passing stranger on the day she was scheduled to be killed for having gotten too old to produce litters. Through a rescue website, Baby found a “forever home” with Dr. Jana Kohl who was inspired by Baby’s story to write a book about her journey, featuring luminaries such as movie stars, athletes, and political leaders from both sides of the aisle, including the current president. Baby spends her time advocating for other abused animals, and best of all, being cuddled, kissed, and snuggled by “the Ma”.  Baby has also inspired national legislation to end puppy mill abuse, aptly called “Baby’s Bill.”