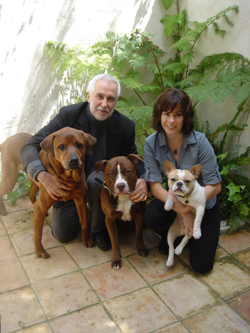 Veterinarian, animal behaviorist, and dog trainer, Dr. Ian Dunbar received his veterinary degree and a Special Honors degree in Physiology & Biochemistry from the Royal Veterinary College (London University) plus a doctorate in animal behavior from the Psychology Department at UC Berkeley, where he researched the development of aggression in domestic dogs.  Dr. Dunbar has authored numerous books and DVDs about puppy/dog behavior and training, including AFTER You Get Your Puppy, How To Teach A New Dog Old Tricks and the SIRIUS® Puppy Training video. In 1982, Dr. Dunbar designed and taught the world’s very first off-leash puppy socialization and training classes — SIRIUS® Puppy Training. Subsequently, he created and developed the San Francisco SPCA’s Animal Behavior Department, the American Kennel Club's Gazette "Behavior" column, which he wrote for seven years, and the K9 GAMES®, which were first held in San Francisco in 1993 and continue as annual events in Japan and Europe.  He hosted the popular UK television series Dogs With Dunbar for five seasons and has appeared on numerous radio and television programs, including the Today Show (US) and Dash Village (Japan). Additionally, Dr. Dunbar has consulted on a variety of movies — full-length features, documentaries and animation (including Pixar’s UP) and he has twice spoken at the prestigious eg Conference.  Over the past 35 years, Dr. Dunbar has given over 950 one-day seminars and workshops around the world for dog trainers and veterinarians in an effort to popularize off-leash puppy socialization classes, temperament modification, and owner-friendly and dog-friendly dog training. After he founded the Association of Pet Dog Trainers in 1993, Dr. Dunbar was inducted into the Dog Fancy Hall of Fame along with four of his heroes, James Herriot, Konrad Lorenz, Lassie, and Balto.  Currently, Dr. Dunbar is TopDog of the Center for Applied Animal Behavior and Scientific Director for www.dogstardaily.com — a free online, multi-media puppy raising and dog training website.