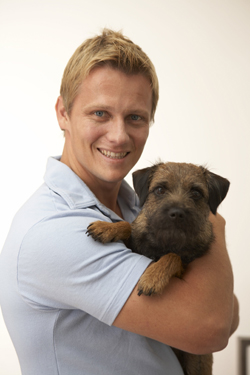 Originally from Australia, Scott has worked as a Veterinary Surgeon in the UK for the last ten years, working in veterinary practices across Britain.  Using his unique down-to-earth style and broad veterinary knowledge, Scott has become a household name in Britain as a leading TV vet and wildlife conservationist, appearing on BBC Breakfast News, This Morning, Crufts, The Paul O’Grady Show, Blue Peter, GMTV and CBBC.

Working closely with a number of animal charities, Scott travelled to Pakistan in the wake of the terrible earthquakes of December 2005, treating injured donkeys and horses.  He worked with International Animal Rescue (of which he is a patron) in India with sloth bears in July 06 and travelled to Indonesia to rescue macaque monkeys in September 07.  In 2008 he returned to Australia to work with scientists fighting to save the endangered Tasmanian Devil, and recently has just come back from filming the rescue of a chimpanzee called Africa from Gran Canaria, working with the primate charity MONA UK.  Other charities close to Scott's heart include Care for the Wild (CFTW), Cats Protection, Dogs Trust, International Fund for Animal Welfare (IFAW) and Compassion in World Farming.

Scott has written a book on puppy care called Puppy Parenting, published by Hamlyn, while also contributing to Your Cat and National Geographic Kids magazines, The Scottish Sunday Mail and The Algarve Resident.  Recently returning to the UK after setting up his first veterinary practice in the Algarve of Portugal, Scott lives with his wife, Zo, daughter Summer, their dogs, Betty and Dave, and cat, Rickets, in Twickenham, Middlesex.