Exercise with Your Dog: Burn Calories While Your Dog Plays Fetch!

It's early in the New Year, and no doubt many have vowed to exercise and get into shape. But do you look at your dog and feel guilty that you're working out instead of playing with him? How about incorporating your dog into a cardio, calorie-burning workout? Sure, you could just go running or biking Read More

Why Should You Vaccinate Against Parvovirus?

To some dog owners, the issue of vaccination is controversial—should it even be done? But to anyone living in developing country where most dogs and cats are not vaccinated or to anyone unlucky enough to see an outbreak, the issue is a no brainer. Take the following historical case in point. Unknown infectious agent drops Read More

What looks like a jelly bean but feels like a gummi bear? No it's not something edible. It's a testicular implant for dogs.

Why Most Families Should Not Breed Dogs 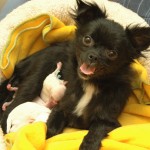 Breeding dogs for kids to witness the miracle of birth can backfire in many ways. In addition to contributing to pet overpopulation see what other unwanted messages it may unwittingly teach.

Why Dogs Bite Children: A Lesson in Preventing Dog Bites in Kids

This animation may seem shocking to some; however according to studies published in the journals American Surgeon and Pediatrics a majority of injuries in kids are to the neck and face. Furthermore dog bites are not uncommon. Nearly a million people—both adults and kids—are bitten badly enough to require a hospital visit. To some people Read More

While winter may be mild in some areas of the United States, in other areas, it’s virtually a wet and windy freezer. We humans have heaters, and special hats and winter clothes but what about our pets? What winter dangers do they face and how can we keep them safe? Keep Pets Inside and Read More

By Sophia Yin, DVM, MS   A reader, Donnie Rion of Carl Junction Missouri, recently emailed with the following dilemma, which will be debated in a town council meeting later this week. The town I live in is looking to revise their leash law to allow dog owners to us electronic leashes to walk their Read More

A New Year’s Resolution for You and Your Pooch: Get Fit with your Dog

If your plan in the New Year is to get fit with your dog, here’s an example of one of Dr. Sophia Yin’s rigorous workout routines.

What to Do if Rover Raids the Litter Box

Smooch Your Pooch: A Cute Children’s Book with Unsafe Suggestions

If I were judging this book just on it’s overall cuteness and character, this book would get a top score. The cartoons are engaging, the rhymes catchy, and the overall message of “dogs are fun” is great. It’s clear that the intentions of the books are good. The authors are encouraging children to make the Read More

Does having a bigger brain really mean your dog is smarter?

New study says that dogs have bigger brains relative to their body compared to cats. But does that mean that dogs are actually smarter? Or that cats are dumb? The study published by researchers at Oxford University charted the evolution of mammal brains over the last 60 million years. They scientists found that mammals such Read More

How to Greet a Dog

“My dog is great with people most of the time but sometime when strangers rush up to him when we’re on our walks, he backs off and growls. The behavior seems to be getting worse. Why does he do this?”

This weekend featured another successful workshop and low stress handling lab in Chicago at Narnia Pet, a fantastic positive-reinforcement based dog-training facility. While I have held most of these labs for veterinarians and their staff, most of the attendees at this lab were dog trainers, groomers, doggie daycare providers, as well as some veterinary hospital staff.

Q) Our ten-month-old Cockapoo is adorable; however, he has a problem. Whenever he gets excited, especially when my grown children and grandchildren come over, he pees on them and on the floor. We try very hard to give him lots of attention and everyone greets him on arrival, but the peeing is quite extensive. It Read More

While dog parks are ace playgrounds for Rovers to romp and Spots to socialize, without proper supervision, squabbles can break out like pimples on a teenager. Luckily physical injury is relatively rare, but sometimes the damage delves deeper than skin. A few bad experiences in an impressionable pooch can progress to a lifelong fear of other Fidos.

It’s one of the most disgusting predilections a dog can develop: poop-eating. You might think that such a foul habit points to a nutritional deficiency or that it means Fido's not getting enough to eat, but actually poop-eating (a.k.a. coprophagia) is a common pastime among dogs.

Calaveras Man Killed by Two Pitbulls—A Lesson About Pitbulls or About What Not to Do with Dogs?

Local news reports, “A Mountain Ranch man was mauled to death by two pit bulls late Sunday afternoon.” The dogs belonged to a friend of the victim who was staying on his property. According to one newscast, the dogs were known to be territorial. They barked, growled and lunged at people from within their confined Read More

Teaching Rover to Race to You on Cue

The problem with speaking English instead of using made-up words is that we assume our pets know what we mean. We say, “Sit” and expect Fido to drop his derrier, but the command Fido’s learned is “sit, sit, sit, SIT!” Then once he’s done the deed, we praise with “Goodsit,” when just “Good” would do, Read More

Click and Cluck: Lessons on Animal Training from Chickens

By Sophia Yin, DVM, MS  April 21, 2010 I went through the picture in my head. Chicken number one climbs up the ladder onto a one-foot-wide platform, makes a 180-degree turn and tightropes across a narrow bridge to a second platform, where it pecks a tethered ping-pong ball, sending the ball in an arc around Read More

On an episode of “It’s Me or the Dog,” Victoria Stilwell tackled the problem of a bull terrier that exhibited mounting behavior. The first solution was to send the dog for a time-out when he mounted. However, the mounting was so severe that the trainer finally recommended neutering, which solved the problem. This case raises Read More

With the recent devastating earthquakes that have hit Indonesia, China, and, most recently and destructively, Haiti, many people are wondering, aren't there any earthquake detection systems around? Well, over 3 decades ago, one was proposed to exist. Haicheng, China, 1975. A massive earthquake hits. Buildings are demolished, roads destroyed, but thanks to an evacuation several Read More