Emma Judson has over a decade of experience owning and training a variety of dogs from rescues, crossbreeds and pedigrees. She currently owns five dogs and is the founder of Canine Consultant in the UK. Emma has written for Dogs Today magazine and is a proud member of the Pet Professional Guild, which promotes force-free training.

To Walk or Not To Walk 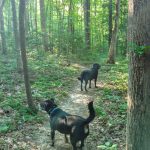 To Walk, or Not To Walk – It’s Not Even A Question Is It? All responsible dog owners walk their dogs once/twice/for two hours/three hours/45 minutes… per day. Everyone knows this, it’s what responsible owners do. But have we sometimes lost track of what purpose a walk actually fulfills – I think we frequently have. Read More

The Importance of Not Being Wrong…

Recently I took part in a research project, and one of the 'tests' we had to do prompted me to think about the feelings, emotions and reactions surrounding finding out that you are wrong, especially when you were convinced you were right. To explain a little further, the test was the Wisconsin Card Sorting test Read More

Not So Great Expectations!

In a great many ways, dogs have a lot in common with humans – and in probably just as many ways, they have huge differences.  We do expect a lot from our pets, in some cases unreasonably and unrealistically so!  Sometimes it can be hard to know where the similarities lie, and where the differences Read More