Sarah Lukemire is a pet blogger at LolaThePitty.com, where she is raising positive awareness and fighting the negative stereotypes associated with pit bull type dogs, networking bully breed dogs in need of adoption rescue, as well as sharing recipes and tips for dog owners. Her mission is to change the perception of bully breeds. 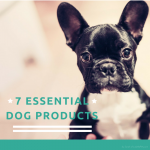 If you’re anything like me, you have about three (large) Rubbermaid containers chock full of dog stuff. And no, that doesn’t include crates, beds, food, etc. I only know this because we just moved to Colorado and had to corral all of the dogs' belongings - it really didn’t seem like we had that much Read More 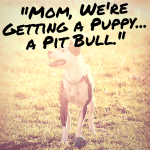 A while back I was reading a blog post (via My Two Pitties) about the moment she told her mother that she was getting a pit bull – and I couldn't help but notice how it was so very similar to our story. I will never forget the first time we met Lola. She was Read More

I’m not sure how it is at your house, but Christmas is sneaking up on me and I can always use help when it comes to brainstorming gift ideas. So I thought I’d share these five awesome gifts, all which are less than $20 and would make the perfect stocking stuffer or a small “thinking-of-you” gift. 1. Read More 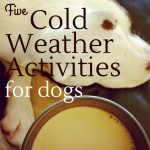 Winter in Minnesota can mean week upon week of not too many long walks or trips to the park with the dogs. Especially when you have two short-haired mutts who shiver when the temps hit below freezing!

Let’s face it, dog treats can get pretty expensive and many of us (myself included) have dogs that deal with sensitivities or allergies to certain foods. I began making homemade dog treats a couple years ago; and while I’m a big fan of making treats from scratch, I’m not a big fan of slaving over complicated recipes. All of Read More

We’ve all been there, the day you bring home your new dog or puppy and they pee all over your floor, chew up something they weren’t supposed to and your find yourself suddenly questioning, “What did I get myself into!?”. I’ve done it, twice. But I can say that our two dogs are more than Read More

Recently I had a friend ask me, "What is wrong with that dog, why is he in rescue?". I couldn't help but feel disappointed and shocked at the same time. I think this is a fairly common assumption with people regarding animal rescues and many may have questions about what exactly a rescue does. But the assumption Read More

Can a Dog be TOO Food Motivated?

We packed up our stuff and I walked Lola outside to the car, both of our feet crunching down the ice and snow in the parking lot. Lola hopped in the back and I sat in the front seat. I was disappointed. I was somewhat disappointed in myself and in Lola. Lola and I had Read More

The Yellow Ribbon – Good Idea or Not?!

The Yellow Dog Project is a movement created for dogs that need space. By tying a yellow ribbon or something similar to the dog's leash you are indicating that this dog needs space, for whatever reason (or perhaps the human walking the dog... either way). However, there has been much debate with this whole 'yellow ribbon please ignore us' movement. What do Read More