Veterans Fight for Their K-9 Partners 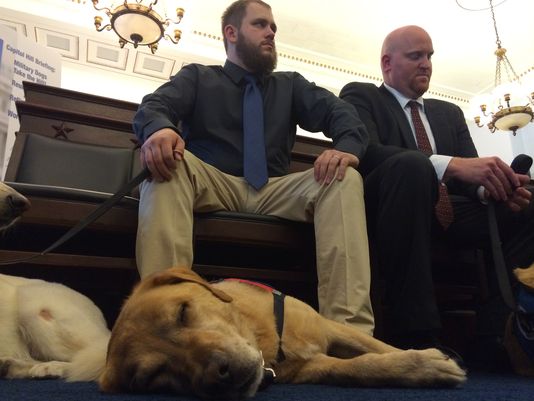 U.S. Marine Corps veteran Sgt. Deano Miller was reunited with his military working dog Thor. The duo took to Capitol Hill Wednesday to urge the military to bring all dogs to the U.S. to retire.
(Photo: Natalie DiBlasio)

They are the silent partners of brave soldiers, risking their lives daily without a moment's hesitation. And yet many of them spend their last days in an animal shelter or in a government facility, often times not even in the United States.

Veterans are fighting for U.S. military working dogs to be given greater respect and a soft place to rest their head after their retirement.

Marine Corps Sgt. David Miller spent every day of his 2010 Afghanistan tour with his military working dog partner, Thor. But it wasn't until four years later that the pair could be reunited. Miller says he didn't have a chance to say goodbye, and he felt that he left his canine partner heartbroken and confused.

In an average year, 300 to 400 of these dogs are retired. Those that aren't adopted end up in shelters or military facilities, living out their golden years alone in a kennel. Those that are adopted overseas have to be flown home to the U.S. at the cost of the adopter, a cost that can run in the thousands.

American Humane Association president Robin Ganzert believes that all U.S. military working dogs should be brought home to the United States, retired on the soil that they served for, and retired with their handler.

The Defense Department says that it's rare that a dog isn't adopted, and that there is a long list of volunteers willing to take in a retired military dog. But Ganzert says some dogs are still left behind, and that the adopter should not have to bear the expense of transporting the dog home, particularly if the adopter is a soldier.

2 thoughts on “Veterans Fight for Their K-9 Partners”