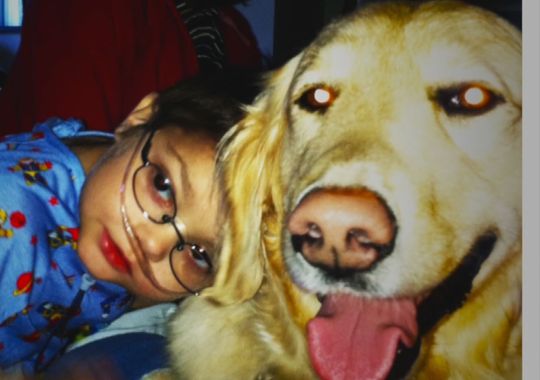 An extraordinary Canine Assistants service dog named Casper had to say goodbye to his best friend, a little boy named Creed. But Creed's legacy will live on as his beloved dog goes on to help another child in need.

Casper and Creed spent countless hours at the hospital together, where Casper visited as a service dog. Creed's dad says that he doesn't think Creed saw Casper as a dog. He finally had a best friend--a dog who saw past his illness and wanted nothing more than to be with him.

Even as Creed began to lose the fight against his congenital medical issues, the pair was inseparable.

On a particularly bad day, Creed's parents told him that Casper was with him, and he held Casper's paw. A nurse in the room said that the dog had brought the boy back to life. Although it was only a short time later that Creed passed away, his legacy will live on through Casper and through a very special Canine Assistants puppy.

Shortly after Creed's death, a litter of puppies was born at Canine Assistants. In his memory, one of the puppies was named after him. His family had the chance to hold the boy's namesake, a puppy who will grow up to be a dog that helps children like Creed.

As for Casper, he will be attending college with 18-year-old Blair Hagelgans, where he will help warn her of oncoming seizures. He will be helping another child live as normal of a life as possible, and opening another chapter in the extraordinary life of a service dog.