Home >> Articles >> How a Dog Saved a Dying Man

How a Dog Saved a Dying Man 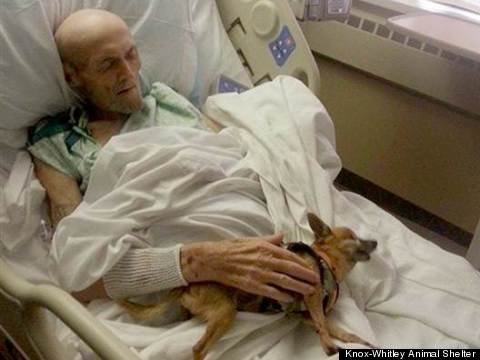 The bond between man and dog is undeniable, and the story of James Wathen and his dog Bubba is no exception.

James was hospitalized over a month ago, and his health deteriorated quickly. The 73-year-old stopped eating, and hospital staff weren't sure how much longer he would be able to live. They soon discovered that James was missing his beloved one-eyed Chihuahua, Bubba.

As fate would have it,  Bubba had been turned over to the local animal shelter during James's hospitalization, and was staying with a local foster family.

Against hospital policy, Bubba was allowed to visit James, and those who were present for their reunion say that a previously listless Bubba was overwhelmed with excitement, and James began to cry tears of joy.

The nurses have described James's unbelievable recovery since the reunion as "a complete turnaround," and say that he is no longer at death's doorstep.

The hospital is changing their pet policy to allow other patients to reunite with their beloved pets.