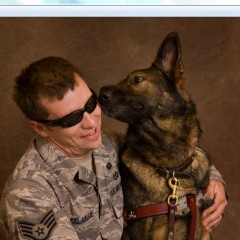 Xxon is a nominee for the 2014 American Hero Dog Award. Xxon is a Fidelco Guide Dog who has helped retired Air Force SSgt. Michael Malarsie lead a normal life despite life-changing injuries.

"'Because of Xxon, I’m part of society again. He’s my hero every day, and I can’t imagine life without him.' Fidelco Guide Dog “Xxon” is more than a guide to retired Air Force SSgt Michael Malarsie. He’s his new wingman in life.

On January 3, 2010 in Kandahar, Afghanistan, Malarsie was blinded and severely wounded by a powerful improvised explosive device that killed four team members, including his best friend Brad. Michael and Brad had trained and deployed together as a two-man team assigned to support a 13-man Army platoon.

With Xxon leading the way, Michael returned to work as the only blind Airman serving active duty in the Air Force. He received the Bronze Star with Valor for heroism on the battlefield. And today, he’s earned a new rank in life: husband and father.

"When I learned of those men who were never coming home, it changed my life. I decided I wasn't going to let being blind hold me back. I’m going to live my life, if not for me, then for them," says Michael. “Xxon is a huge piece of that.”

Xxon is a game-changer for the entire Malarsie family. He provides increased freedom and independence not only for Michael, but for his wife, Jesse. “When Xxon is working with Michael, I don’t feel that I have to watch out for him every minute,” says Jesse, “I can focus on being a mom to our three children.” "