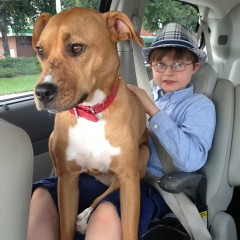 Xena is a nominee for the 2014 American Hero Dog Award, presented by the American Humane Association. Xena has made headlines as a dog that was found near death, and who is now the best friend of Jonny, her human sibling. Together, Xena and Jonny are raising awareness about animal cruelty, the kindness and gentleness of pit bulls, autism, and that shelter animals make great best friends.

"'Life began horribly for our dog now widely known and adored as Xena the Warrior Puppy. In September 2012, Xena, a Staffordshire Bull Terrier, was close to death when she was brought to the DeKalb County Animal Services’ shelter in Georgia. Her nose was scabbed over, she was emaciated, dehydrated and given just 1% chance of survival. The veterinarian determined she was about 4 months old and had been confined — and starved — in a cage before being dumped in someone’s yard.

A shelter employee and founder of Friends of Dekalb Animals, Chrissy Kaczynski, took her home and began loving her back to life, and the dog rebounded quickly, living up to her name.

The Hickey's of Johns Creek, Ga., adopted Xena the Warrior Puppy in March 2013 — and this is when Xena proved to be a hero for an 8-year-old boy who needed her. Autism had left Jonny closed off and isolated. He could speak, but spent most of his time in silence. After Xena bounded into his life, he began talking and singing to her non-stop.

Now a happy chatterbox at home, Jonny thrives in Xena’s company. Jonny's thrilling his parents and teachers with the progress he’s making in school. Xena’s story has been shared in more than 105 countries around the world. Together they are "Spreading the Words" - raising awareness about animal cruelty, the kindness and gentleness of pit bulls, autism, and that shelter animals make great best friends."

You've Got a Friend in Me: http://www.youtube.com/watch?v=FcW9zB2iFi8