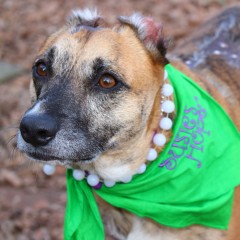 Susie is one of the four-legged nominees for this year's Hero Dog Awards. She's a therapy dog out of High Point, North Carolina, and she and her owner have an extraordinary story to tell.

This is their story:

"In 2008, I was mauled by an abused dog. Because of the attack, I suffered a miscarriage and will never be able to have children.

In 2009, a pit-bull-mix puppy licked the face of her owner’s child. For her “crime,” her owner beat her so severely that he knocked teeth out and broke her jaw. Her body was set on fire.This dog and I don’t sound like the perfect partnership to change animal-cruelty laws, do we? But caretakers treated the mutilated puppy with her ears burned off and 60 percent of her body covered in third-degree burns infested with maggots, and I ended up adopting the pup known as Susie. Her constant love, sweet spirit, and boundless forgiveness healed my depression. As we became best friends, I knew Susie could be an amazing spokesdog for animal welfare.

Susie’s triumph over pain and fear led us to fight for stronger anti-cruelty laws in North Carolina. In 2010, we proudly stood by as Governor Bev Perdue signed Susie’s Law into effect with Susie’s pawprint beside the governor’s signature.

But teaching never ends. Susie, a certified therapy dog, goes to schools, hospitals, and churches as we bring messages of kindness, respect, and responsibility to children and adults. Susie greets everyone with a wag and a smile, never thinking about inspiring three children’s books and a movie, but living in the moment to give kisses and cuddles to those who need to know that forgiveness and grace are the greatest gifts."