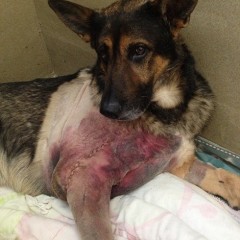 Kota is a nominee for the 2014 American Hero Dog Award, presented by the American Humane Association. A heroic police dog with a wild story to tell, Kota saved the lives of his human partners when they faced a dangerous suspect.

"On January 3, 2014, Kota responded to a burglary in progress call to assist officers in searching a house. K9 Kota located a suspect hiding in the upstairs crawl space and was in the process of detaining the susepct when the ceiling gave way and Kota fell approximately 8 feet to the hardwood floor below.

Officers could hear Kota yelping loudly and incessantly for approximately one minute but his handler could not immediately check on him because officers were still engaged with the suspects. Another officer took control of the suspect Kota's handler had so she could go check on Kota but when officers turned around, they saw Kota already standing right behind them. Officers were amazed to see Kota had crawled back up the stairs considering the severity of his cries and were moved by his devotion and loyalty to his handler and the other officers as well as his desire to stay in the fight.

Kota was taken to the emergency Vet where it was discovered he had a humeral Y fracture (basically he split his elbow in half and the fracture continued up the humerus) and an additional fracture further up the bone. Kota underwent a 4 hour surgery and is currently attending physical therapy in hopes of returning to full duty. (The picture was taken several hours after his surgery). The surgeon said returning to narcotics work is a realistic goal but is not optimistic about Kota's return to full patrol capacity."