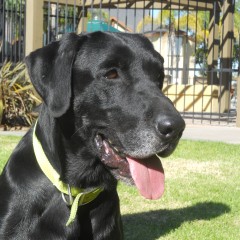 Chaney is a nominee for the 2014 American Hero Dog Award. As is a former IED detection dog, Chaney saved the lives of countless soldiers in war. Now in his retirement years, he was adopted by one of his handlers and educates people about PTSD and how dogs can benefit veterans.

"Chaney is an eight-year-old lab who retired from the Marines in 2013 after multiple tours in Iraq and Afghanistan as an IED detection dog. While deployed, Chaney not only saved countless lives by locating IEDs out in front he also served as a great morale booster for everyone in his squad. Since retiring, Sgt. Chaney was adopted by one of his handlers: me, Cpl. Hatala. Chaney and I now spend many hours volunteering around the Midwest for a nonprofit organization, Retrieving Freedom, Inc. (RFI). RFI trains service dogs for disabled veterans and children with autism. Chaney now spends his time educating others about what a service dog can do and does for veterans, including scent detection demonstrations for children. Currently, more service members are committing suicide from Post-Traumatic Stress (PTSD) than are being killed in action—approximately 22 each day. Service dogs can help prevent this from happening.After retiring as a military working dog, instead of being on the front line Chaney has continued to save lives through education about PTSD and the ways service dogs can benefit those suffering from PTSD. Chaney is competing for the Military Working Dogs Adoption Program because we believe reuniting even one handler with their dog makes our work worthwhile. Chaney has had an impact on my life and further, an impact on countless others he has touched. I hope these impacts would be replicated in the lives of the handlers who receive their dogs from the money donated if Chaney wins."