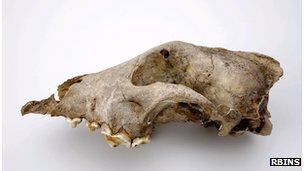 New research from Finland's University of Turku points to Europe as the location where dogs were domesticated tens of thousands of years ago. The timing and location that dogs emerged has been long disputed, and this new research suggests that dogs originated in Europe at least 18,000 years ago. Perhaps even more interesting is that some of the remains appear to be 30,000 years old or more, which opens the door for the possibility that domesticated dog-like animals evolved much earlier than researchers previously believed.

The DNA analysis performed by the University of Turku's researchers reveals that modern-day dogs are most closely related to European wolves or dogs. Interestingly, they don't appear to be linked to modern European wolves, which means they could have evolved from a potentially extinct variation of the European wolf.

So what does this all mean? We're piecing together the ancestry of modern day dogs in hopes of understanding how dogs and humans came to evolve so closely with one another. If this particular study is accurate, it would mean that dogs began to live alongside humans when they were still hunting and gathering, and before there were any settled human civilizations. They would have likely incorporated into human groups slowly, and may have started off just picking up the scraps from their hunts.

The bond between man and dog is undeniable, and as we begin to learn more about dogs' history, we may discover that the relationship between the two species dates back farther than we ever imagined.